Skip to content
HomeTonight you will be with me in Paradise 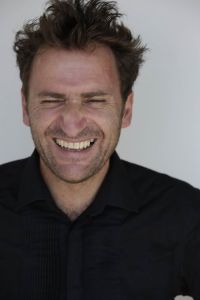 No, not the words spoken by Christ to the good thief as they were crucified side by side on Calvary. Tonight you will be with me in Paradise, if you accept the invitation, on a Wednesday evening around 8 p.m. to travel to the Paradise pub on Kilburn Lane, Kensal Green, just 100 yards up from the Ladbroke Grove – Harrow Road junction. It’s here that Wade Bayliss (pictured left) hosts the Island Experiment, London’s premier open mic venue.

Wade, a singer, musician and filmmaker, describes himself as a non-trepreneur, but he’s someone who makes things happen. He runs events, he’s working with the London Coffee Festival at the moment, and he plays and sings with the Island Experiment band and he’s been hosting open mics in the capital for seven years, the last two at Paradise, a venue he inaugurated. Every Wednesday evening musicians from far and wide come together at the Island Experiment and perform two or three songs, usually their own compositions, to a large, highly appreciative audience. What sets this open mic evening apart and makes it so special is the care and respect with which Wade and his co-host Wills treat the musicians who are performing. It doesn’t matter whether the individual is a complete novice or a hardened professional, every performer is introduced with great courtesy and every musical contribution is valued and warmly received.

So it being Wednesday evening, as it was last night, I pick up my Gibson acoustic and head off to Paradise. Prior to going on stage, however, I take the opportunity to talk to Wade, anxious to learn a little more about what drove him to set up The Island Experiment at Paradise. He’s an unassuming man, but he replies quite forcefully: “In a city so dominated by the banking economy, which is driving rents up and forcing more and more artists to abandon their art, because of the need to take full time employment just to survive, Londoners need the sort of opportunity provided by the Island Experiment at Paradise. It’s so easy for musicians to fall out of their musicality and when that happens it’s a great personal loss and a loss for us all.” Then he’s off, a bundle of energy, bounding onto the stage to introduce a new act or to thank a performer who has just finished. Incidentally, he has his own Jimmy Page story, so ask him when you go there!

The venue itself is an upstairs function room in the Victorian pub which has retained almost all of its old world charm. There’s a good-sized stage and a sound system which is always expertly managed; and at the back of the room a bar. The walls, with their ageing wallpaper, are oddly decorated with forty or more framed pictures of the Sacred Heart, of St Teresa of Avila or Lisieux, and many other devout images, which combined with the low lighting creates an atmosphere worthy of a true musical sanctuary, but believe me, the place can rock and it can roll depending on who is performing.

Before I go on stage I sit and listen to the gentle but firm voice of ZoZo (pictured right), a 23 year-old student at the Institute of Contemporary Music Performance who accompanies herself on guitar for two of her own songs. In the third year of her song writing degree, she has already established a calm stage presence which is bolstered by her highly attractive face paint. Later she tells me that she also has a penchant for wearing odd shoes. Born in Scotland and brought up in Spain, ZoZo speaks Spanish and Catalan and if you want to catch her, she’s usually at Paradise a couple of Wednesdays per month, and she is a genuine talent. 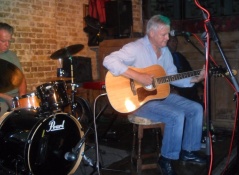 Following ZoZo, I get up on stage and sing two of my own compositions, for the second of which I’m backed by the excellent house band comprising Nick Harrison on drums, Tommy on lead guitar, and Patrick on bass. A wonderful, uplifting experience! These guys are so good and so modest!

One final observation: if you want to witness a truly multicultural environment, come to Paradise. The rich ethnic diversity of North Kensington is present in all its glory, and it is a tribute to Wade and Wills and to all who contribute to the evening that absolute interracial harmony prevails. They deserve a bloody award for the marvellous example they set!

So, if you’re looking for a really good night’s entertainment and you like live music, then make a point of visiting The Island Experiment at Paradise with your partner or friends or simply on your own: you will not regret it, I guarantee!

If you want to contact Wade, you can do so at wade_bayliss@hotmail.com. You can also learn more about ZoZo at www.zozoofficial.com.

One thought on “Tonight you will be with me in Paradise”