I breeze into the Science Museum this morning at around 10.30 and a pretty girl in a blue blouse at the desk where they ask you if you want to make a donation asks me if I’d like to make a donation. I reply, without breaking my stride or slowing in the slightest “Not at the moment.” And I walk on into the heart of the museum, have a quick look at some steam engines and space rockets and then ask one of the staff for directions to the nearest male toilet.

Much relieved, I then exit the museum and make my way to Imperial College Dental Centre, which as anyone who knows will know is round the corner from the museum in Prince’s Gate. Check in there, fill in the form and discover I’m thirty minutes too early for my appointment. So I head back out and re-enter the Science Museum.

On the main door I ask if anyone knows about bomb damage to the building during WW2. I’m advised to ask at Information, so I go back inside and there’s a huge queue, which I jump, and there’s the same girl, 5’ 2”, bright red hair, big smile, possibly 27, and she asks me to wait. I say, “I’m not in line because I’ve been sent to ask a question at Information.” She looks at me and says “You’re that guy who just breezed past me earlier this morning without stopping. I thought you must be someone important.” I smile at her as if to say “Dead right, sister, I’m a man on a mission,” and I ask where she’s from. “Italy,” she says proudly and with an even bigger smile. “What’s your name?” I say and she says “Katia.” “Very nice,” I say, and smile back at her before moving on through to Information where I ask my question about bomb damage, and still no one knows the answer, but I’m advised to return in 30 minutes. “Right,” I say, and I return to Katia, interrupt her talking to a couple with young children, give her another smile and say “I’m a scientist. I’m looking for information and I’ll be back.” She says “Great.”

So off back to the dental surgery, and as this is my first visit I’m surprised to see that the dentist treating me is called Dr John. I say, “That’s my name too, what a coincidence.” But as both she and her assistant have pronounced my surname, Lyons, as though I was French and from Lyon I am slightly taken aback. Nevertheless, this is South Kensington so I don’t get annoyed but I ask if they were born in this country. The dentist, yes, her assistant, a blonde girl turns out is from Lithuania. So I say to the dentist, “She’s excused, but really, you should have known, it’s not that difficult.” “Yes, but we treat a lot of French people here,” she says. Smiles all round. The dentist is very pretty, auburn hair, about 27 years old, and 5’ 2” in height. Her assistant about the same. I think to myself, “What is this? How come they’re all 5’ 2” today?”

Long story short. X-ray fine, teeth fine, just a little cleaning with the ultrasound and I’m out of there. And back to the Science Museum. But now I’m out of luck. Katia is no longer at her position, she’s on her break. I was going to ask if I could take a photo of that smile to share with my readers. But there you go! 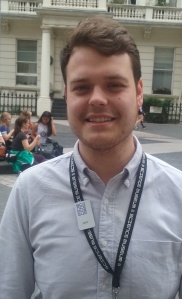 Then on to information. New people, but no one knows anything about bomb damage. So out I go again. On the street outside two more employees of the museum, one, a young woman, Jane, deputy assistant manager, brown hair, about 5’ 2” and a very pleasant British smile, and Jack (pictured) a young man who is around my height. Couldn’t have been kinder the pair of them. So I ask them same question. They know nothing about bomb damage to the Science Museum. But Jack raises a forefinger and points south, down towards the Victoria and Albert Museum and says: “If you’re looking for signs of bomb damage, that’s the place.” I take his picture, thank him and head off to the V & A, pausing en route to take photos of the really extensive scars to this national institution caused by our German neighbours (I know it’s over, no hard feelings).

I then walk round to the main entrance and approach Information. Helen is on the desk. White blouse, short silver hair, blue nails, petite, 5’2”, around 27 years old and very cute: no wedding ring, and a huge smile and British, very helpful, shows me the page on the Internet relating to bomb damage and together we locate when it happened. November 1940. Another woman on the desk adds that the museum made a policy decision not to repair the marks left by the shrapnel. “Quite right too,” I say. “It’s a museum. Should have a sense of history.”

Before I leave, I pop outside into the museum garden and there’s a very pretty young woman, olive skin, long brown hair and big smile. White blouse, black apron and black jeans. She’s in charge of the paper and pens for the children who want to draw a picture of the museum. “Where you from,” I ask. “Portugal,” she says. “You live here?” “No, but I come in the summer to work in London.” “Eu falo português,” I tell her. “Oh you speak Brazilian Portuguese.” Her name is Rosa and yes, she’s 5’ 2”. She asks me if I want to draw a picture. “No, but I’ll take a photo of some of the art work if you don’t mind. “Be my guest,” she says. And that’s it. The lengths I go to!

Footnote: Saw Jimmy Page from Led Zeppelin on the steps to the men’s facilities in Victoria Station on Sunday: he descending, me ascending the stairway. We were wearing almost identical black leather jackets. He clocked mine, I clocked his, but not a word was spoken.