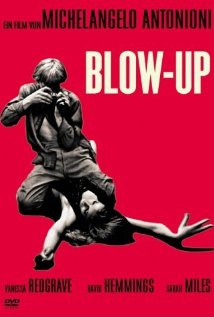 Blow-Up (1966), was directed by Michelangelo Antonioni, and featured David Hemmings, Vanessa Redgrave, Sarah Miles and Peter Bowles. There are also appearances by Jeff Beck and Jimmy Page, and by Janet Street Porter, and others.

The film is very loosely based on a short story by the Argentinian writer, Julio Cortázar (who makes an uncredited appearance as a homeless person) . His original story, Las babas del diablo [The devil’s drool], describes an incident witnessed on a bridge: a young boy appears to be running towards his mother who has her arms outstretched to greet him. When the observer in the story steps back, however, he notices a man waiting by a car with an open door, and it becomes obvious to him that the scene is one of attempted kidnapping of the boy.

Perception. What we see and what we want to see, in film and in art and in life. Illusion and self-delusion. And from our point of observation, from where we are standing, what information do we have, and is it the correct information, and is it sufficient to make a judgment of the situation we are observing, or the emotions we are experiencing? In film, in art, and in life: how do we arrive at our judgments, how do we assess the honesty of other people’s feelings, their words, their actions when so much is façade and pretence and evasion and deception? Is it all pointless carnival, as the frolicking students (who appear at the beginning and end of the film) would suggest in their seemingly inane mimes? A going through the motions?

The basic narrative goes like this: David Hemmings is taking photos in a park in Charlton when he spots a couple kissing. He takes photos of them. When the woman (Vanessa Redgrave) notices him, she runs after him and demands he hand over the camera. Hemmings refuses but says she can have the photos when he has developed them. Once he does develop them, however, he notices that a fourth person was present at the moment he snapped the couple kissing. By blowing up the exposures, he discovers that there was a man in the bushes with a gun pointed at the presumably illicit lovers. He returns to the scene and discovers the dead body of Redgrave’s lover. Inadvertently Hemmings has captured a murder on camera.

Perception. What we see and what we want to see, both objectively out in the world, and internally in our emotional lives. Although set in the swinging sixties, a time which on the surface purported to be full of novelty and fun and new-found freedoms, nobody in the film is happy and there are no deep human connections: there is wealth and poverty and demonstrations on the streets of London. The people with money and access to drugs and an incessant party life seem no happier than the men emerging from the doss house at the start of the film. Everything is veneer, false appearances, of little value.

Values. The film presents a critical meditation on the bankrupt spiritual and emotional values of contemporary society and the individual. What is at stake is honesty, that fundamental virtue which according to the 18th century French writer, Voltaire, is the cornerstone of human society. Dishonesty destroys relationships on a personal level and can destroy the very fabric of society.

Insofar as any film can be important, Blow-Up is important, a cinematographic masterpiece. But you have to look beneath the veneer to appreciate it!