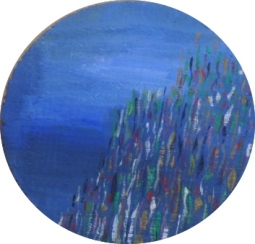 This is the last of the recent paintings executed in acrylics on the wooden lids
of French cheese boxes. It shows the energies and colours of life emerging from the sea
and reaching up to the sky. The painting is double-sided and the reverse (shown
below) represents the literal reverse of life, the dull grey mass of uncreativity
of those who prefer to exercise their purse rather than their imagination
and are consequently disengaged from the vibrancy of their true humanity.

Life is dedicated to my wonderful son, William, born 38 years ago today,
a natural poet, gifted with insights I could only dream of possessing!
Happy Birthday, William! 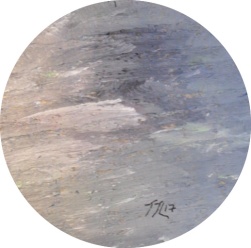 Mere memorial
think of this date
of flowers
at your fingertips
of your blue eyes
tinged
with the sad notes
of a violin
how forms descend
find their way
into the ground
your ear cocked
for evidence
the ash of loss
kindnesses
of the word
a smile that lingered
that died on the lip
and your hands
with which you shaped
your undying love
beauty—as the poet said
is what others love in us
love. . . a place of abode

After my father died, it was quite a surprise to discover a very large trove of poems he had written over a number of years. I knew that he occasionally wrote poetry, and from time to time he would share some of his poems with me, particularly if they were on topical subjects, such as the 1968 invasion of Czechoslovakia.

Of the three poems below, the nature poems speak for themselves. In addition to being an accomplished musician and artist, my father’s other great passion was gardening and he took it very seriously. We had a very large, sloping garden attached to the house where we grew up and my father was constantly modifying its features, adding a water course and a pond, relocating flower beds, setting aside a small area which he used as an allotment to grow vegetables, trimming the box hedge that ran alongside the lower lawn so that it resembled a steam engine. He had a rich imagination and he could turn it to anything.

The third poem, is about his marriage to my mother and the risk she took by agreeing to share her life with him; and he recognizes the trust that her decision involved. It was, in the end, a marriage that lasted a lifetime, and only death eventually separated them. And it was a marriage that made them, that defined their adults lives. And it was the absolute cornerstone of their emotional lives. They were both schoolteachers, my father a graduate and my mother virtually self-educated. But in their day, people perceived them as a couple, as an inseparable, loving couple. The union was strong, the family unit was strong and every other aspect of life appeared to be subordinate to the love that had brought them together.

It has to be said that my father was a dreamer, and in the photo accompanying this piece, taken when he was still at St Joseph’s Academy in Blackheath, I believe it is possible to see the dream in his eyes. Nothing wrong with being a dreamer or a poet! My father’s dream was realized in his marriage to my mother and in the six children they had. All his other endeavours, professionally or artistically, were a celebration of the love he gave and the love he received.

Late autumn sunset
Humped copper-coloured cloud, like billowing canvas
Ponderously sailing over tree tops towards the dark,
Attended by a fleet of widely scattered skiffs.
Sun-tinted filmy sails against a sea-blue sky.
Scarcely a movement of twig or leaf below
Save a rustle in the high top elms
And saffron fronds of silver birch
Draped around its pianola-music bole
Standing on uncut emerald grass
Green-spiked like springing wheat.
Caught by the western glow
Two apples hang upon a topmost branch
Unplundered reassure of Hesperides.

I stood upon a river bank
Whose current carried tumbling leaves.
The water moved but I was still.
It passed, to merge into the sea.
Travelling in rippling rapid speed
Over rocks it foamed its urgent pace,
Then slackened, scything cuts at bends,
Its path confined to journey’s end.

And then I knew it carried me:
For as I gazed upon its flow
Time had gone upon its stream,
Seconds, like bubbles, here, then gone –
A paradox of life itself.
For while, at times, we are quite still
Or feel increase in our life’s motion
The seconds ever bear us on
To lose ourselves within the ocean.

Till death do us part

When first they met the sea was calm
He told her tales of wonder and delight
That lay beyond the harbour walls
She longed to put to sea : they two alone,
Sailing among enchanted isles.
It was a prospect that entranced
Intoxicated and allured.
And yet she feared the deep.
He was no master mariner,
But once before had lost a ship
(And, near his skin, so bronzed and muscled)

She looked into his eyes
And cast aside her fears.
She knew that she would go.

They only took what each would need
He told her what; they jettisoned the rest.
And so they sailed into the deep water:
Where they had berthed the currents swirled,
Carrying to and fro, among the eddies,
The flotsam, so lately and so lightly tossed away,
Drifting till it was cast up stranded on the beach –
Brief witness where a ship was tied;
Up-anchored, they sailed, and left it all behind.