Foxes know it
you can see it in their eyes
as they look longingly
at the gardens that will soon
be stripped to the bone :
on shed roofs they laze
soaking up the last rays
of the summer sun

There are roses in bloom
the piecemeal beauty
of their petals still intact :
and so gingerly
down by the back fence
I begin to pick blackberries
the plump succulent flesh
occasionally bursting
under the slightest pressure
such a delicate operation
and then a thorn
pierces my forefinger
drawing thick globules of blood
that instantly blend
with the stains
from the crushed fruit

The frailty of it all
year after year
the rise and fall of beauty :
she had it in her eyes
in the soft smooth skin
the graceful gestures
of her hands
her dancer’s feet
in the breadth of her smile
and so we pray
for the resurrection
of the body

This week I have been revising a book of poetry that has been 18 months in the writing. Sections of the poem have been read by a very good friend of mine, Paul Taylor. I asked him as he was reading to mark the text wherever he found the lines confusing or simply dull. I am now working my way through the pages, sometimes rewriting passages he has marked as uninteresting or simply cutting them out if they no longer seem relevant to me.

It is always useful to have an editor, someone who can be trusted and whose judgment is based on wide reading and long years of experience. On this page I would like to express my gratitude to Paul for the task he undertook with great enthusiasm and completed with great professionalism. The lines  below, written over a year ago, nevertheless echo a poem submitted to the blog mid-August by Molly Rosenberg. According to Paul Taylor, my short poem is actually a metaphor for love. Who knows?

Wild blackberry canes
barbed brambles
heavy with fruit
thrive on the steep banks
of the railway cutting
goodness that grows
innocently
out of the soil :
but easy access to them is barred
by dense patches of nettles
so the berries gather dust
ripen and then fall back
into the undergrowth
to be eaten by birds
and by the large colonies of fox families
that have pitched their tents
at various stations
along the line

The Japanese haiku is a poem which replaces a few simple brushstrokes of the painter with a few simple words. It is a style of observational poetry built from short strokes of language.

Art is about observation and consciousness and the transference of that consciousness into an expressive form to create an aesthetic object. Sounds complicated, but it can be as simple as the representation of a bison on a cave wall, or as a poem by Molly Rosenberg, inspired by the picking of seasonal fruit. 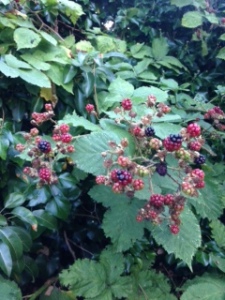 Tearing skin
on sharpest thorns,
spots of crimson
stained on white shorts.
Deep green leaves,
folded, curled,
hiding the treasure
embedded within.
A glint
of purple blackness,
first a single berry
then a cluster,
more and yet more
appear amid the cruelty
of the thorns
and the gentleness
of the leaves.
After the stabbing
and the pain
the sweetness
of the reward.