The poem below was written in response to the Katrina disaster of 2005. Poetry, as Keats famously pointed out, is about beauty and truth, in other words it is about life in all its aspects because there is no area of life where beauty and truth are irrelevant. All that we value in our lives is concerned with beauty and truth. That includes the relationship we have with our loved ones, with our fellow citizens and the world’s wider population. We are all in this together and we have rights and responsibilities as individuals under the charter of the United Nations.

So how should a poet engage with the world, a poet obsessed with love and beauty? The answer, I believe, is so simple, as William Burroughs would say: the poet is no different from anyone else, the poet should be engaged with his immediate circle and his wider world. Beauty and truth are synonyms. Lies are ugly. Poetry celebrates beauty and denounces ugliness and does so by employing the stylistic tricks of its trade, or should I say, of the medium, just as journalists do theirs, film makers theirs, artists theirs, musicians theirs. Politicians also have the tricks of their trade, and we should be wise to them. Always! Beauty is truth, truth beauty, that is all you need to know!

Your words,
Mr President, have grown charcoal-
brittle, they stain your lips
as you speak them, and bring no
comfort to those who hear;

let us
at the very least, carbon-date
your thoughts, your notion
of what is right and wrong,
your black-and-white

world,
we who have not drowned
but who looked on in horror
as you abandoned a people
who were surplus to

requirements!
Where were you when the saints
came marching in and the waters
rose and the wind howled and
the levees which had kept

despair
at bay were finally breached?
A serpent appeared in the rose
garden and said DO NOTHING
as your daddy did, surrender

dignity,
surrender truth and, as your
daddy had done, botox
the lies until you can smile
in the face of death,

turn up
your nose at the stench of decay,
turn a blind eye on the strangers
upon whose kindness your office
once depended. Democracy is in

the eye
of the beholder, but the dead are
disenfranchised. Katrina Katrina
to the tune of an old blues song, on
a blue piano, until the end of time.

One of the joys of learning to speak Portuguese was to be able to read the wonderful books written by Clarice Lispector, Brazil’s greatest novelist. Her writing displays a hyper-sensibility akin to that of Franz Kafka: she notices every detail, she feels everything, but she does not judge her characters and she never slips into sentimentality. She is her own person and for all the tribulations and trials she writes about, she is affirmative. She would concur with a character in one of the novels by the Colombian, Gabriel García Márquez, “Life is the best thing that’s been invented.”

Born in the Ukraine in 1920, Clarice was taken to live in Brazil at the age of two months and ultimately became a Brazilian citizen. She studied law and worked as a journalist in Rio de Janeiro where she began to write fiction. She was also a very popular newspaper columnist and it is in these columns that many of her observations first appeared. She died in 1977.

♦ In another life I once had, aged fifteen, I entered a bookstore, which seemed the world where I would like to live. Suddenly, one of the books I opened contained sentences that were so different that I just stood there, captivated, reading away. Thrilled, I thought, but this book is me! Only after did I discover that the author was considered to be one of the finest writers of her generation: Katherine Mansfield.

♦ I only write when I want, I’m an amateur and I want to remain amateur. A professional is someone who has an obligation to himself or to another to write. But me, I make a point of not being a professional, to preserve my freedom.

♦ To eradicate your own defects can be dangerous. You never know which is the defect holding up the whole building.

♦ There are times in life when we miss someone so much that what we most want is to drag that person out of our dreams and hug them.

♦ Surrender, as I have surrendered. Dive into what you don’t know just as I have done. Don’t try to understand. Living surpasses all understanding.

♦ But there’s life, which is to be lived intensely, there’s love. Love which should be lived to the very last drop. Fearlessly. It won’t kill you.

The Passion According to G.H., is perhaps Clarice Lispector’s most widely read novel. It is a highly rewarding if not a particularly easy read.

The summary on Amazon reads thus: G.H., a well-to-do Rio sculptress, enters the room of her maid, which is as clear and white ‘as in an insane asylum from which dangerous objects have been removed’. There she sees a cockroach – black, dusty, prehistoric – crawling out of the wardrobe and, panicking, slams the door on it. Her irresistible fascination with the dying insect provokes a spiritual crisis, in which she questions her place in the universe and her very identity, propelling her towards an act of shocking transgression. Clarice Lispector’s spare, deeply disturbing yet luminous novel. 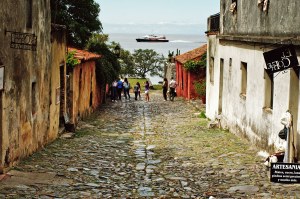 While living in Brazil, I spent several vacations in Argentina, and on every occasion I crossed the River Plate by boat from Buenos Aires to the beautiful town of Colonia del Sacramento in southwestern Uruguay.

Founded by the Portuguese in 1680, the settlement’s strategic location meant that it was much prized by the Spanish as well as the Portuguese and so it passed back and forth from crown to crown until finally in 1809 it was included as a permanent municipality within the newly independent Uruguay.

Its architecture is a mixture of Spanish colonial style and rural Portuguese streets which run down to the shore of the River Plate. The remnants of many buildings from the colonial era have survived, but what lends Colonia its particular mystique is the spiritual silence which dominates the historical quarter of the town. The town’s relative isolation and the lack of vehicles circulating in its narrow, cobblestoned streets set it apart from the bustle of modern life, and its proximity to the river means that it enjoys wonderfully fresh air all year round.

There are long straight streets lined on either side

with majestic lime trees. A raw soul-searching wind
blows up from the south across
the vast empty expanse of the River Plate. It rakes
an empty hand through the withered leaves piled
in the gutters. This is autumn. A single grey squirrel
scavenges for food across the lawns of the town square.
Centuries ago, these trees were planted and pruned
in an inspired act of faith. Three sturdy limbs emerge
from each trunk reaching heavenwards in supplication:
give us this day our daily bread. Some brittle rusty leaves
still cling to the branches; they shiver and scratch hopelessly
in the breeze. So much silence now. Soon the last leaves
will fall. These were the prayers of yesterday, of yesteryear.
So much silence now. The last leaves will soon fall.
No bird song will be heard. So much silence.

There is a stillness and a silence in these streets,
some of which are paved with wedge stones quarried
from the river shore, with a gully running down the middle
–in the Portuguese manner– to gutter away the excess rain.
Here and there separating one backyard from another,
a free-standing dry stone wall, the thin broad slabs
cut and laid so long ago by anonymous hands.
Lawns are trimmed to the point of manicure,
and vibrant clusters of white and lilac hydrangea
soak up the gentle afternoon sun. Under the sycamore
shade we sit and observe small pockets of time
ferried in by visitors who appear to survive on
their own oxygen. The Governor’s house near
the main square has been reduced to its foundations;
the once magnificent Convent of San Francisco
is in ruins; the Viceroy’s residence is just a roofless,
empty shell. Colonia, on the banks of the world’s
widest river, has become a monument to human
mortality, drawing no distinction between the beauty
of life and its own conserved and perpetuated death.